A Seasonal Guide to Pollen by Month

The UK pollen calendar isn’t a short one, sadly. It kicks off as early as January, and continues through spring and summer well into autumn. September marks the end of the pollen highs, but that doesn’t mean there will be no pollen in winter.

While hay fever peaks last around seven months, the good news is most people won’t be dealing with allergies for that length of time. Different months bring with them different pollens - and these each come with their own symptoms. All you need to do is take note when your nose starts twitching, your eyes watering and you’re reaching for the tissues. Then look at our calendar below and see if you can identify the pollen that’s causing the problems.

Tree pollen is the first to arrive in the pollen calendar with February recording high numbers, followed by grass pollen peaking in June and then weed pollen in October. In this guide, we’ve taken a closer look at the different pollens that come out to play month-to-month.

Learn when the different types of pollen come out, and don’t forget you can use Your Pollen Pal to check for low pollen areas near you. 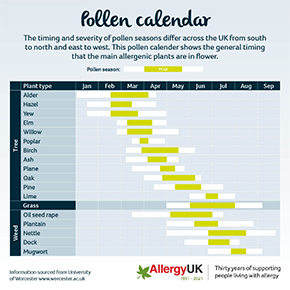 While this month has a low pollen count, tree pollen is starting to say hello – specifically hazel, yew, alder, and willow trees. This means you can actually get hay fever in January, but symptoms are often mistaken for a winter cold.

Seven tree pollen variants start causing havoc in February. As well as hazel, yew, alder and willow, we also see ash, elm and birch pollen coming into play. It’s in this month we see our first peak in pollen season with hazel and yew hitting their highs until mid-March.

In March, poplar, oak and plane pollen make an appearance. Hay fever in March rises due to elm, alder, willow, and poplar pollen – but it’s also the end of hazel pollen.

Pine pollen shows its face in April while ash, birch, oak and plane all peak this month. April may be known for its showers, but it’s also when tree pollen season starts to come to an end – yippee! Just birch, oak, pine and plane remain from the tree-pollen family. Grass, oilseed rape and weed pollen also start to emerge – boo! – with nettle and plantain beginning their pollen season.

This month is quite the rollercoaster when it comes to tracking pollen. Dock and lime pollen start triggering hay fever in May as they begin their season, while both pine and oil seed rape peak and end within the month. Oak and plane end their peak – but grass pollen begins hitting its high notes. If you have a birch pollen allergy, you’ll be pleased to hear birch pollen season ends.

The good news is that we’re starting to see less pollen now and, thankfully, dock and plantain pollen season ends this month.

Grass and nettle pollen seasons end, signalling the end of hay fever season. Windows can finally be opened wide and the fresh air can sweep through your home without causing any runny noses or itchy eyes – it may start to get a little chilly though.

When are Types of Pollen most Common?

While there are many different hay fever causes, they all fall under one of three main categories: tree, grass and weeds. While there’s some crossover of the three variants, they each have their own specific hay fever season in the UK.

Spring (March, April and May)

Tree pollen, grass pollen and weed pollen are all around from March through to May. Tree pollen and grass pollen have peaks, so spring hay fever symptoms could be more severe, such as painful sinuses and a cough.

Summer hay fever brings with it a peak in grass and weed pollen, meaning itchy and watery eyes could be much worse, especially when going outside with allergies or around cut grass.

Hay fever in autumn reduces as pollen season ends at the beginning of September.

Tree pollen begins its season in January, meaning hay fever in winter can sometimes be mistaken for a cold as symptoms include a runny or blocked nose, sore throat, cough and itchy eyes.

If you’re planning on spending time outdoors, especially during peak pollen season, read our tips from Allergy UK to help manage the symptoms.

What Products Best Fit Your Need?

Noses, conks, hooters....call them what you will, we've all got 'em. And sometimes they just need a bit of love, especially when it comes to sneezing, wiping and blowing. The kind of love that comes from soft, comforting, reliable tissues that are purpose designed for your everyday needs.

For many people, our hands are probably our most frequently used contact point. They're great for grabbing, catching, touching and generally moving things around, but this also means they're also prone to picking up mess, muck and germs. And that's fine, as long as you're prepared. Thankfully, we've got your back (or rather your hands) with a range of wipes, towels, gels and tissues to help keep you spick and span

We've all fallen victim of the dreaded drips of soup, ketchup or gravy all over our lovely faces, and yes, our tissues and wipes are great for removing this worry from your life. But, we've gone one step further with facial products specifically designed to help remove allergens from your face or covering up your nose and mouth entirely to help prevent the spread of viruses.

Explore More
How do I recycle?

You can subscribe to receive our wonderful updates here

You have been successfully subscribed

Sign-in or register to view your allergy quiz result

This quiz should take less than 8 minutes.
Once complete you will need to Sign in/Register to see your results.

You will now be redirected to the quiz results page

Are you sure you really want to cancel?